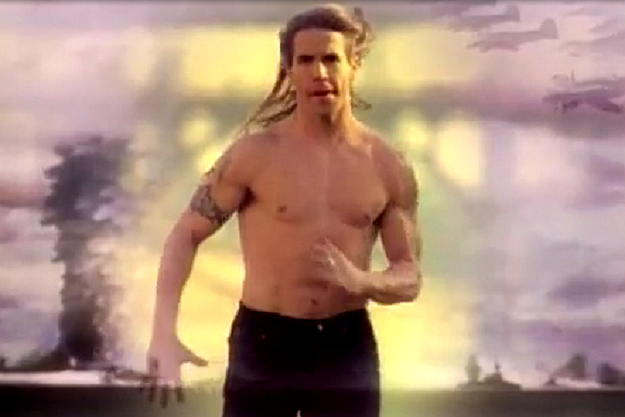 Red Hot Chili Peppers recently unleashed the video for ‘The Adventures of Rain Dance Maggie’ upon the world. The clip, which is the first single off their new album, ‘I’m With You,’ is the latest from a band that treats video-making like an art form. They’ve been doing it since ‘True Men Don't Kill Coyotes’ from their self-titled 1984 debut album, and have filmed dozens over the years, most of them memorable, some unforgettable and probably even a few the band would like to forget (ever see ‘Catholic School Girls Rule?’). So, without further adieu, here's a look at Loudwire's list of the Top 5 Red Hot Chili Peppers Videos:

The Chili Peppers take fans on a wild ride with this all-animated clip, which features snippets from MTV's ‘Beavis and Butt-Head Do America’ movie interspersed with caricatures of the band (then featuring Jane’s Addiction six-stinger Dave Navarro) riding an impossibly mammoth roller-coaster and rocking out alongside it. The song is a cover of the 1975 funk hit by the Ohio Players.
4

Covered head-to-toe in shiny silver paint and let loose in an arid Californian dessert, the Peppers get down like the wild beasts that they are in this video for the first single off ‘Blood Sugar Sex Magik.’ The band’s label allegedly tried veto the clip for being too “weird” and “artsy” for mass consumption, but the Kiedis clan won out and it went on to nab Moonmen trophies for "Breakthrough Video" and "Best Art Direction" at the ‘92 MTV Video Music Awards.
2

Easily one of the coolest videos ever put to tape, 'Dani California' finds the Peppers saluting the iconic musicians that blazed trails ahead of them -- and then taking their rightful place right behind them. Kiedis and crew clearly enjoy themselves as they play rock star dress up, cribbing the distinct styles of artists like Elvis, the Beatles, Jimi Hendrix, David Bowie, the Sex Pistols and unplugged Nirvana as they hit the stage in this performance-based clip.
1

The song that sent the Chili Peppers to No. 2 on the Billboard Hot 100 chart is still the one with the most resonance, and so is the understated clip that accompanies it. Directed by renaissance man Gus Van Zant (director of such films as ‘Good Will Hunting’ and ‘Last Days’), the video takes viewers on an earnest walking tour through the gritty streets of the band’s hometown -- the City of Angels -- and draws to a close with the unforgettable image of Kiedis running in slow motion at the camera as atomic blasts discharge in the background. It's not the end of the world, but it is the beginning of RHCP's ascent into mainstream cultural dominance.

Is one of these five Red Hot Chili Peppers videos your favorite? Or is there another one that should have made our list? Tell us which Chili Peppers clip you would pick as the hottest of all time in the comments section below: